We serve as our membership’s voice in the business community in the GTA and Ireland. We have strong relationships with the Canadian government through the Canada-Ireland Interparliamentary Group; the Irish government through the Embassy of Ireland Ottawa, Enterprise Ireland, Tourism Ireland, Invest Northern Ireland, and the IDA; and with European Chambers in Canada through EUCCAN.

Our networking events are ideal for business and socializing. Whether you are a new arrival; have been here for years; are 2nd, 3rd, 4th or 5th generation Irish-Canadian; or are just interested in networking with our members, we are pleased to provide the venue for connecting the dots. 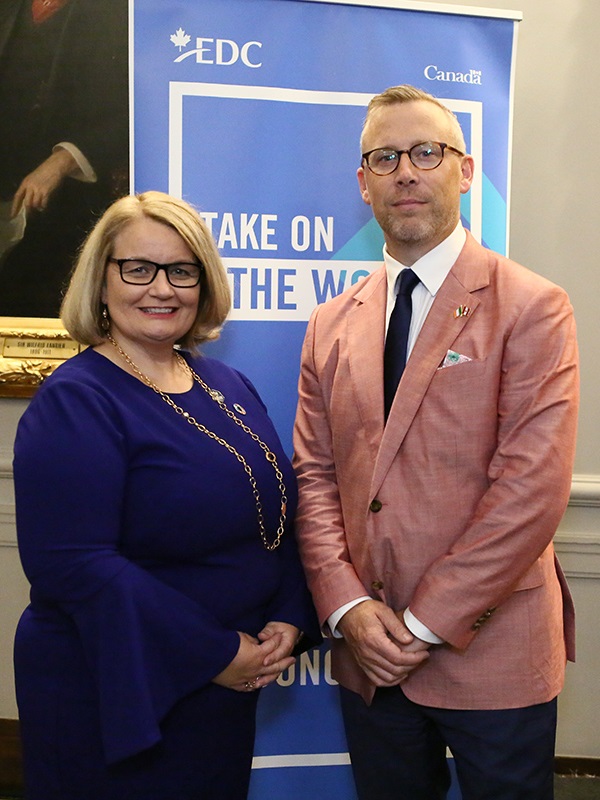 Originally from Malahide in Co. Dublin, Rob relocated to Canada in June 2011, via a couple of years living and working in Kingston, Jamaica. Rob joined the chamber in 2011 and has been a board member since 2012. A graduate of Gormanston College, Griffith College and UCD (Michael Smurfit School of Business), Rob has a BA and MBA and has spent the majority of his career working in mobile telecomms in Ireland and the Caribbean, largely with Telefonica and Digicel. Now a Director at Rogers here in Toronto, Rob leads a team of project and launch managers, delivering new products to the enterprise market. Rob is married to Sarah, who heads up Canadian PR agency Citizen Relations and they have two children, Tess and Olly. Rob was a reasonable rugby player, is an inconsistent runner and a poor golfer!! He will watch most sports but particularly enjoys the Leafs. He lives on the Danforth.

Carolyn Dunne, CREM Event Services. Carolyn has been a part of the Irish community for many years. She is the daughter of John and Gail Dunne who are pillars of the Irish Community. John Dunne is one of the founders of the Ireland Fund of Canada as well as a supporter of all of the Irish organizations for many years. Carolyn executed the events and sponsorship for the Ireland Fund of Canada for four years before taking on contract work in the event world under CREM Services. Carolyn has participated as a judge for the Toronto Rose of Tralee and was Chair of the Irish Canadian Immigration Centre 2012-2014 before moving to Advisory Board Member role. Carolyn’s contracts have included; Senior Manager, Sponsorship for the JUNO Awards, Director of Brand Partnerships & Experiences for Canada’s Walk of Fame, event work with EMC=2 and most recently the John Tory for Mayor 2018 Fundraising Events.

President of Bell Media’s The Harold Greenberg Fund.  A MBA graduate with twenty-five years of experience in the creative industries, John’s career ranges from film festivals, to media production and financing. After staring his career at TIFF and the launch of Cinematheque Ontario, his interest in development and production led a position with Independent Pictures and contract work on several film and television projects. He then moved into financing, with positions at the Ontario Media Development Corporation, the Canadian Media Fund and at Telefilm Canada where he served as a Regional Director and the Television Sector Head. In 2005, he joined The Harold Greenberg Fund as President and Board Member. At the Fund, he has overseen investments of more than $35 Million and has helped develop over 1000 feature film and television projects. In addition to the main feature film development and production programs, John has overseen partnerships and funding support for film festivals, script writing labs, film promotion initiatives and awards, documentaries and short film projects. Recently, he steered the Fund through the merger of Bell Media and Astral Media. In 2009, John launched Grey County Media and co-founded the Toronto Irish Film Festival (TIRFF). Now in its sixth year, the Toronto Irish Film Festival celebrates the very best of Irish cinema and promotes the work of Irish filmmakers to the Greater Toronto Irish community and the Toronto film festival public. Grey County Media offers media consulting to various not for profit and private companies. John also sits on various industry boards, juries and advisory committees.

Dr. John O’Dwyer is an Adjunct Professor and Executive-in-Residence at the Rotman School of Management, University of Toronto.  Since 2002 he has been teaching in Rotman’s Executive Education programs, as well as GettingItDone®, a final-year MBA elective course. Over the past thirty years, John’s professional career has spanned financial, human resource, and operational management areas.  He has held a variety of management positions including President, CEO, and business owner. John is currently a partner with Strategic Advisory International, a management consulting firm that focuses on providing client organizations with management tools that enable them to transform their winning strategies into genuine results. In his role as partner, John works with a wide range of clients from Fortune 500 corporations to smaller entrepreneurial and high-tech organizations, where he is a trusted advisor and strategy-execution-expert.

I arrived in Canada on June 2009. Originally from Cork where I trained and worked as a carpenter for many years, and then eventually got into Real Estate. That didn’t last too long when the global recession hit in 2007 and I decided to immigrate to Canada.

Arriving in Toronto to a whole new world it wasn’t long before I found myself back at the carpentry. Initially working in the local 27 carpenters union and moving on to residential renovations. I spent the first five years in Toronto working in construction knowing the goal was to eventually get back into real estate.

In the summer of 2014 I got my real estate license and jumped into the business full time and haven’t looked back since. I initially started out with Bosley Real Estate where I spent the first 5.5 years and in 2020 made a move to RE/MAX Professionals.

I specialize in residential real estate where the majority of my work is in Toronto’s West End, High Park, Roncesvalles, The Junction, South Etobicoke areas etc. I do occasionally work on the East End and other areas of the city also. My main clientele are first time buyers, move up repeat buyers, sellers and investors.

I pride myself on providing quality service, step by step advice and analysis on each aspect of the home buying and selling process. From an initial discovery meeting and needs analysis to navigating the entire process to closing, and beyond. Over the years I’ve built a great team of professionals around me who also help support my clients through the biggest transactions of their life.

When I look back, the years have flown by since my arrival in 2009. Canada has been great to me. I met my wife, bought a beautiful home, have a wonderful daughter and a career I love. I’m truly grateful for it all.

On my down time I enjoy playing golf, love music, travelling, good food and wine, but if you know me you know I love to talk real estate. Feel free to reach out any time, I’m here to help and always happy to chat.

Originally from Dundalk, in County Louth in Ireland, Carmel moved to Toronto in 2016 to broaden her horizons and to see if it were possible to forge a worthy career in North America. In November 2016, Carmel secured employment with the George Brown College Foundation as the Senior Development Officer, raising funds for student bursaries, scholarships, innovative programming and for capital expansion to ensure that the door to education would always remain open to as many students as possible, that the College could adapt to accommodate them and that state-of-the­art technology would keep them at the cutting edge, hence continuously and usefully employable through their working lives.

Carmel came to this calling with in excess of 15 years of fundraising experience in the not-for-profit sector, working for reputable organizations such as GOAL Global in Ireland, the British Academy of Film and TV Arts and Screen Queensland in Australia.

She is currently pursuing a Master’s Degree in Higher Education (part-time) at the University of Toronto. A graduate of both Liverpool John Moores University and Limerick University, Carmel is a keen runner and relishes both the arts and extensive travel. She is married to John C.R.Wildman, the distinguished Canadian actor.

It is her aim to immerse herself in Canada and make a lasting contribution without ever losing touch with the enduring and heartfelt memories of her native Ireland where most of her loving family still abides.