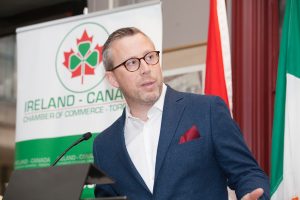 It’s been a landmark year for Irish Canadians.  The relationship between Canada and Ireland, while historically strong, continues to get stronger. Ireland and Canada have two leaders that act as beacons to a younger generation of people; while neither country will claim to be perfect they are working on offering a better perspective – in the words of Taoiseach Leo Varadkar, one of openness, transparency, individual freedom and trade.  And in a world increasingly uncertain, the opportunity presented by an ongoing, deepening partnership between the leaders of Canada and Ireland can only be to our professional benefit.

Looking back on the year that was, throughout January and February our news cycles in Canada and at home have been dominated by the current US administration — threats to NAFTA, free travel and at times it felt everything in between – dominated water cooler conversations and had the business community jittery to say the least.   The British Parliament voting to leave the EU did little to stabilise said jitters and while Ireland had just recovered from a run on the banks, BREXIT provided a run on the passport office as everyone and their mother claimed Irish heritage.

In lighter news: Ireland won 2 from 3 in the 6 Nations Rugby in February, a loss to Scotland and wins over France and Italy. And later in the year, with Ireland hosting the Women’s Rugby World Cup in August past, Canada’s ladies were the victor taking 5th place overall to Ireland’s 6th.

March was a busy month in Irish Canadian circles, with much activity gearing up to St Patrick’s Day. The Ireland Fund hosted their 37th annual St Patrick’s Day lunch, attended by 1,100 people – congrats to Jane Noonan and the team. There was also the real TIFF, the Toronto Irish Film Festival, a great cultural offering, with the Young Offenders topping the bill. John Galway, a member of our Chamber Board is one of the leaders of that initiative and it’s always a fantastic showcase of Irish talent in front of and behind the camera.

As we moved into April and May, we welcomed the outgoing Taoiseach Enda Kenny in what would be his farewell visit, stepping down as leader of Fine Gael shortly after. He joined us for breakfast, hosted in partnership with Enterprise Ireland.  Mr. Kenny, echoing remarks by Prime Minister Trudeau, highlighted the shared values between Ireland and Canada and the importance of the middle ground, where as we see with so much of the political discussion so many people are being pushed to the left by anger and the hard right by fear.

We were also fortunate to host the Ireland Canada Business Association as part of the Ireland Canada Summit. Topics that were to the forefront of the discussion were CETA and Brexit and the opportunities and risks provided by these to Ireland and Canada.

In June, formal Brexit talks began between Britain and the EU. In late July we were surprised and delighted to get the news that we would have another visit by An Taoiseach, this time Leo Varadkar TD. Irelands youngest Taoiseach joined us for a Breakfast Briefing on his arrival in Toronto in August and as part of this gave an update on the Irish Economy – which as many of you will know is in rude health –

The Taoiseach chose Toronto to announce that Ireland will be doubling its Global diplomatic and agency footprint by 2025. A great step for a small country whose biggest asset has always been its people.

As part of An Taoiseach’s visit, he participated in a number of events. A notable one being the ground-breaking of Grasett Park.

Growing up in Dublin I am quite familiar with the Famine statues on Dublin’s Custom House Quay. The statues were made by Irish sculptor Rowan Gillespie and mark the departure of approximately 1 million people from Ireland during the Famine of 1847. The sculptures are haunting and capture perfectly the wretchedness of those fleeing Ireland. In Ireland Park here in Toronto there are corresponding sculptures marking the Arrival, in fact in May to Oct of 1847 over 38,000 Irish refugees arrived when the city’s population was a mere 20,000…

Toronto took those poor souls in, some of whom had contracted Typhus in the restricted confines of the coffin ships. People like Dr. George Robert Grasett put aside the prejudices of the day and fought for the better treatment of these people – putting his own life at risk in the process. Dr Grasett died of Typhus in 1847.

It is, I think, a timely reminder to all of us of our roots as Irish Canadians and of the selfless acts that have gone before us to ensure our safe passage hundreds of years later.  As we have seen from the current Trudeau government, Canada of the Welcomes has not changed and is still a refuge to those seeking a new life in 2017.

The Ireland Park Foundation have now secured land, funding and the design for a park that commemorates Dr Grasett and the many other Canadian’s who worked to save refugees fleeing a famine in another country. Congratulations to Robert Kearns and the team at Ireland Park Foundation for a great addition to the cultural history of Toronto.

September has seen the provisional implementation of CETA, with tariffs removed on 98% of Canadian goods entering Europe and likewise for European goods entering Canada. This will help unlock enormous untapped potential for greater trade and investment between Ireland and Canada. At our September Business Breakfast, we received some great insights and analogies on this from Danny McCoy, CEO of IBEC, Briain McEnery the Global President of ACCA and Sanjeev Chowdhary the director of Global Affairs Canada’s FTA taskforce.

I hope you’ll all agree it has been quite the year to date – and with more to come and a special emphasis on community:

My focus for the remainder of this year and into next will be, maybe, not hosting two Pieces within 6 months – but some simpler initiatives for the Chamber:

I want to extend my thanks to those who have been integral to the success of the Chamber in 2017.